The Luxury Condos at One Steuart Lane (aka: 75 Howard St)

"This is the most non-San Francisco building I have ever seen in my life. It doesn't belong here at all."
-- SF Commissioner Rick Swig 12-9-15 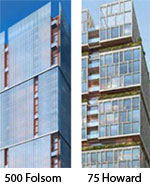 This page documents the corruption at City Hall and the out-of-control Planning Department when it comes to development. Reasonable input from residents was consistently ignored.

The New York developer of the luxury condos at One Steuart Lane (aka 75 Howard) paid hundreds-of-thousands to lobbyists and lawyers and in return got special treatment from the SF Planning Dept such as extra height, extra bulk, negligible setbacks, and no requirement to provide public open space. This means more blocked views, wind at the street level, and shadows on sidewalks and public open space. It also makes 75H out-of-sync with the neighboring buildings--including those that are locally owned. The Gap HQ, Hills Plaza, Rincon Center and others played by the rules. They taper up to points, have significant setbacks, and provide lots of public open space.

The exceptions and variances for 75H did not make for a better building. The Planning Dept did not even get a superior, unique design in return for its giveaways. It is basically the same copycat "stacked boxes" design (with the same flimsy see-through top) as 500 Folsom by the same architectural firm (right). It is not the "timeless San Francisco presence" that only their marketing materials claim it is.

The people of San Francisco have made it clear that they do not want the Embarcadero overbuilt. The overwhelming vote against the 8 Washington project clearly repudiated the Planning Dept and the politicians who vigorously supported it (Mayor Lee, Gavin Newsom, and former BCDC director Will Travis). Fewer people live around 75 Howard so there is no way six-figures could be raised to make sure it was developed correctly. Nor should that be necessary.

No one opposed construction of a new building; they just wanted it done right. Residents (213 petition signatures), businesses from eight neighborhood buildings, and numerous civic organizations** did speak out against the way 75H was planned. City Hall ignored them. Worst of all, none of the neighboring comparable buildings (Gap HQ, 201 Spear, Rincon Center, Hills Plaza, One Market), including those that are locally-owned, got such special treatment.

* LACK OF OPEN SPACE:
It is horrific planning to put a residential building so close to others, especially office buildings. All of the nearby buildings listed above contributed significant public open space when they were built. The Gap built a park on the north side of its building. Rincon Center even has a 30 foot wide sidewalk all along Howard. On the other hand, 75H was granted exceptions. The corporations-first Board of Appeals upheld those decisions.

Critics protested that 75H would cast a shadow on Rincon Park most days of the year, and now it does (right). SF planning officials were very deceptive by proclaiming that the building would not shade any park under the jurisdiction of the Recreation and Park Dept. They were clearly concealing the shadow problem by not pointing out that Rincon Park is under the jurisdiction of the Port, not Rec and Park.

* EXCESSIVE HEIGHT:
Nowhere in San Francisco are there building facades over seven or eight stories fronting the waterfront. 75H is the one exception. A couple of buildings have towers higher than that, but those upper towers are set back significant distances around the seventh floor. They maintain the consistent facade height all along the Embarcadero.

This site should not have had a 200 foot height limit. When the Embarcadero was moved inland around the new Rincon Park, the height limit should have been reduced to put it in conformance with all the other buildings. The property owner certainly would have accepted that, especially before they started planning this new building. The garage, which 75H replaced, was only seven stories tall. This building also should not have been granted an extra 10% which brought it up to 220-feet. According to the planning code, that extra 10% is only allowed on buildings that taper up to a point (such as the Gap, Hills Plaza and Rincon Center). 75H has a flat top. 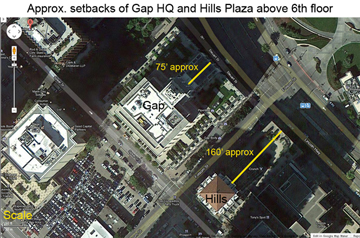 * LACK OF SETBACKS:
This building is boxy with insignificant setbacks. At the street level it lines up with its neighbor to the north (Rincon Center) and it neighbors to the south (the Gap headquarters, and Hills Plaza). All three of the neighboring buildings have considerable east facade setbacks at the 7th floor level. We estimate the Gap tower sets back about 75-feet and the Hills tower sets back about 160-feet (click on the image to see the setbacks). Rincon Center is curved so its setbacks vary and, anyway, there is a row of buildings between it and the Embarcadero. These three neighboring buildings also have numerous setbacks higher up. They taper as they get higher. 75 Howard does not.

It seems nonsensical to have a setback on the south side facing open space, yet no setback on the north side which is directly across from another residential building (Rincon Center). 75H should also have a greater setback on the west side where it is extremely close to the 18-story office building at 201 Spear. This lack of setbacks not only blocks existing views but also creates an awkward and undesirable lack of privacy at all the buildings. In sum, 75H needed greater setbacks on its north, west and east sides.

* IGNORING THE REQUIREMENT THAT BUILDINGS STEP DOWN:
A basic tenet of sound urban planning says buildings should step down as they get closer to a waterfront. This requirement is specified in three distinct areas of SF planning regulations: the General Plan's Urban Design Element, the Downtown Area Plan, and the Transit Center District Plan. SF planning officials ignored this fundamental rule to benefit the New York developer. 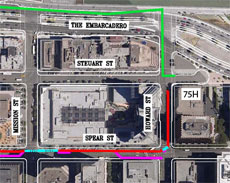 75H is right over the major cross-town sewer line that runs down Steuart south of Howard. Odor is enough of a problem that the city installed "odor stacks" along the Embarcadero. These are basically vertical pipes over the sewer line, about 10 feet tall, that lift odors above pedestrians (right). There had been a "stack" in the sidewalk immediately in front of this building's new entrance. It's been removed, but the odors will still be there. (There is a storm drain a few feet away.) This DPW map shows the main cross-town sewer line (green) and a new line (red). Both lines connect and pass directly in front of 1 Steuart. Click on the map to bring up a larger version.

* TREES:
The developer killed 10 beautiful and healthy sidewalk trees. A certified arborist testified all 10 were healthy, were structurally sound, and should have been able to remain for decades. At first, the SF Board of Appeals ordered the developer to maintain the trees or at least develop a replacement plan that would create a comparable canopy. However, when the board reconvened to hear the developer's plan, they reneged on their requirement and allowed a plan that only replaces a few of the trees. The board allowed all of the trees to be cut down even though the contractor testified he didn't need to remove all of them.

* HEY BUDDY, WHERE THE HELL IS 1 STEUART?
It is always a mistake to fool with the standard street numbering system that everyone understands. Re-designating the 200-block of Steuart Street into Steuart Lane will only create confusion and contribute to congestion as first-time visitors, cab/Uber drivers, and delivery people look for "One Steuart." Most will assume, logically, that it's up near Market. While it's only two blocks away, during periods of heavy congestion (which are returning) that can be a 20-minute drive. Befuddled drivers making U-turns will not help. This special treatment also puts an odd street number (1) on the west side of the street (unlike the rest of Steuart and other SoMa streets). MTA should not purposely make congestion worse, especially for lame marketing purposes.

* EFFECT ON TRAFFIC:
The Planning Dept used five-year-old data to analyze traffic issues. Despite the out-of-date info, their analysis admitted the project would create "...traffic increases that would cause levels of service to deteriorate to unacceptable levels at the intersection of Spear and Howard streets."

* GARAGE ENTRANCE ON HOWARD:
The custom is for buildings to have their garage entrances on the less-travelled side streets. Of course this building is the exception, and that will also contribute to congestion on busy Howard St. 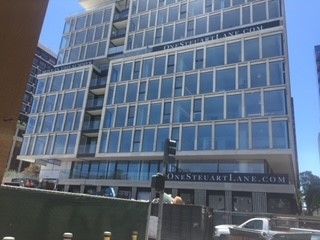 * CLAIM TO BE THE LAST DEVELOPMENT ON THE WATERFRONT:
That's nonsense. First of all, 1 Steuart replaced an existing building. Any building owner on the waterfront can apply to replace her building. Secondly, there are still parking lots up and down the Embarcadero that could be developed.

* WINDOWS:
The norm is for buildings to have shaded, or lightly reflective glass to reduce bird strikes. This is particularly important along the waterfront where birds migrate. One Steuart seems to have plenty of perfectly clear glass.

* THE MONEY LAUNDROMAT:
It has been widely reported that a high percentage of luxury condo purchases are made by anonymous foreign buyers laundering dirty money using shell companies to conceal their identities. Of course developers (including DJ Trump) and realtors love these shady characters, but one big problem is that they drive up prices for honest buyers. The city gets lots of tax revenue but should not be looking the other way knowing some of these funds are coming from international drug and arms dealers. An investigation in New York found that dozens of condo owners in one building included Russian oligarchs who were already under federal investigation. The city should require title insurance companies to identify the buyers of high-end condos.
https://www.nytimes.com/2015/02/08/nyregion/the-hidden-money-buying-up-new-york-real-estate.html/

* NO RESOURCE PLANNING:
The city does little to consider all the resources buildings like 75H require, such as water, power, sewage disposal, police, fire, etc. "We'll figure that out later" seems to be the city's approach. Meanwhile, residents of 75H will be able to watch their raw sewage pollute the bay at the Howard Street outfall.

* FAILURE TO CONSIDER ALTERNATIVES:
As "48 Hills" columnist Tim Redmond pointed out, the Planning Dept didn't consider shorter alternatives, simply because the developer claimed they wouldn't be economically viable. That's not a valid reason for Planning to avoid their obligations. A shorter building would have resolved shadow issues, among other problems. In fact, it was economically viable to leave the original garage in place. The developer repeatedly said it was a "gold mine."
https://48hills.org/2015/11/the-agenda-nov-16-22-supes-will-decide-fate-of-two-big-downtown-projects/