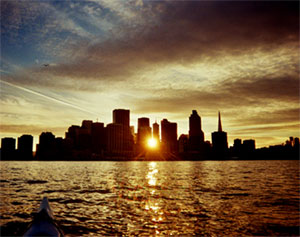 “If the broad light of day could be let in upon (people’s) actions, it would purify them as the sun disinfects.” -- Lewis Brandeis

It is hard to see how the local politicians' you-scratch-my-back-and-I'll-donate-to-you relationship with corporations is any different from what the Republicans in Congress do. It's how they stay in power despite snubbing the voters.

The site is under development. Send us your examples of how city hall is treating San Francisco residents/voters/taxpayers as second-class citizens. We will consider them.

We are starting by focusing on District 6.

SIGN CLUTTER RETURNING:
Frisco seems to be regressing back to the 1950s when it comes to signs. We are being inundated. The oversized luxury condo building at 75 Howard (now called 1 Steuart Ln) has four advertising signs about 25-feet wide (each). One simply reads "Move-in This Summer." They are not directional--the building is not open. We filed a complaint but Ada Tan (ada.tan@sfgov.org) ruled there is "no violation." This picture shows the 100-block of Spear. (Branson, MO doesn't look this bad.) Three more signs have already been approved for this stretch of Spear. Worst of all, one of these signs is a double-sided blade sign 25-feet tall and attached to the historic streamline moderne Rincon Annex building. (The former post office designed by Gilbert Stanley Underwood, architect of the Ahwahnee Hotel.) There's a matching 25-foot eyesore on the Steuart side. We have filed a complaint. We're told this is all allowed thanks to the Board of Supervisors passing ordinance # 179-18 on 7/10/18. Most cities, including SF, started removing this easily preventable form of urban blight in the 1960s. Obviously this is only going to get worse.

LOUD VEHICLES:
The number of super loud vehicles, seemingly without mufflers, roaming SF streets continues to increase. They can be heard three or four blocks away. Residents near the waterfront report these vehicles can be clearly heard crossing the Bay Bridge all the way to YBI. It appears that most are operated, night and day, by individuals from out of town. Many, especially on weekends, seem to drive around without stopping. They just cruise across the bridge and clog our streets. City Hall is way behind other cities in addressing this problem. "Time" magazine ran a cover story (a series of articles) on urban noise problems about 18 years ago. They pointed out that just one loud motorcycle crossing town at night can awaken tens of thousands of residents. Our legislators seem to be the ones in the dark.

ARE THESE BUILDINGS VULNERABLE TO COLLAPSE DUE TO LIQUEFACTION? 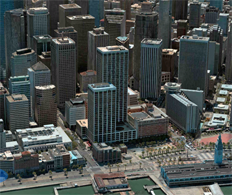 There seems to be a frightening gap in the information provided by City Hall (and local media) about the safety of mid-size buildings on landfill during earthquakes. We sometimes hear about the vulnerability of low buildings on landfill in places like the Marina. It’s also not unusual to read about high-rises, usually over 25 stories high, that have solid foundations reaching down to bedrock. What seems to be concealed from the public is information about large buildings up to 25 stories high that may not have foundations secured in bedrock. Is this to benefit the building owners and protect them from losing tenants and incurring high construction costs?

One well-researched book on urban development in San Francisco, “From the Ground Up” (Douglas Frantz, 1991, Holt & Co), implies that the large office towers at One Market may have pilings that do not reach down to bedrock. How common is this? What exactly would happen to a 20-story building when the ground under its foundation turns to liquid? (Can’t be good.) Frantz states that another nearby 22-story building has pilings that descend no more than 114-feet even though the bedrock is as deep as 155-feet. Why is this concealed from the thousands of people who visit, live in, and work in these mid-size buildings?

City Hall’s love affair with luxury condo developers is obvious (left). The New York-based developer of 75 Howard St. (a.k.a. One Steuart Pl), for example, got just about every planning exemption, exception and variance possible. By contrast, the adjacent comparable buildings (similar height), WHICH ARE SF-OWNED, got no such special treatment. The Gap HQ building and Rincon Towers Apartments (which was 1/2 affordable housing when it opened) are loaded with setbacks and publicly-accessible open space (starting with Rincon's 30-foot wide sidewalk along Howard). They taper up to points. Hills Plaza also followed the rules. The boxy 75H has no affordable housing, a flat top, no open space and negligible setbacks. How did the out-of-state luxury condo developer get such special treatment? One gue$$. Who says City Hall isn’t corrupt? Answer: no one. The building is now at full height and its shadow, as residents warned, now shades Rincon Park (right). Read more about 1 Steuart Pl:
www.ResidentsFirstSF.com/75H 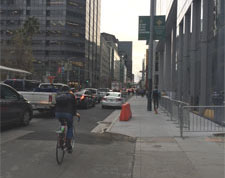 After the tragic death of a bicyclist on Howard in March 2019, politicians rushed before the TV cameras to pledge improvements. They promised a "Quick-Build Program." While simple bike lanes are unsafe, they are much better than no bike lane at all. And that's what existed on Howard between Beale and Main streets -- no bike lane (left). After all the promises, this very unsafe situation on Howard was brought to the attention of the MTA Commission on 4/2/19. It was also pointed out to the mayor's office, board of supervisors and Bike Coalition that a simple and inexpensive solution would be to paint a temporary white line and the words "Bike Lane" (which is common -- see temp lane on Folsom at right). Would have taken about an hour to paint. Nothing more needed to be done. Cars were parking at the curb but no spaces were designated for that purpose. What did city hall actually do? Nothing. Bike riders continued to be forced into traffic for another year and half. We believe they were trying to accommodate Facebook which occupies the highrise at that location.

POLICE REFORM STILL NEEDED:
Police response-times are often slow for quality-of-life calls. Even non-stop car alarms in the middle of the night are assigned to the day shift. Police officers tell us that -- when an issue involves a business (such as a restaurant illegally allowing late-night club activity) -- they have been instructed by their leadership to support the business and not those who live there. That is not community policing. It's the opposite. Customers at Safeway (Jackson St) were shocked to see a disabled senior physically hauled out of the store by the SFPD for -- wearing a small backpack. No other reason. The store manager repeatedly claimed the mayor's Covid proclamation prohibited backpacks in stores, which was of course incorrect. There was no disruption or violence until the police arrived. Their only goal was to please Idaho-based Safeway. A complaint was filed, but there is zero indication that any corrective action took place. The police commission and chief were notified but expressed indifference. It is apparent that SF still has a New York-style police department (as it was once labeled by the respected former San Jose Chief of Police, Joseph D. McNamara, PhD).

The original plans for Rincon Park allowed a single, one-story restaurant in the southern end of the park. After the official RFP was released, and a developer had been chosen, the city secretly allowed the project to stretch out into two, two-story buildings. The height limit was discarded and the square footage grew by more than 50-percent. BCDC completely ignored one of its primary duties -- to maximize physical and visual access to the bay. Now picnickers and dog-walkers have to share the same lawn.

Speaking of barriers between the city and bay, ever wonder why the mound under Cupid's Span is so long and high (right)? The park's restaurant had a specific height limit of 17-feet above the park's grade. That's not high enough for two-story commercial buildings, so by raising the height of the mound, the developer claimed the "grade" was higher and buildings exceeding the limit were allowed. Our source? The project manager who was proud of this scheme.

COVID SUPPORT:
It is recognized that the mayor's office provided testing and vaccine support for residents. Not closing construction sites raised questions.